Live At The Gatherings 2015 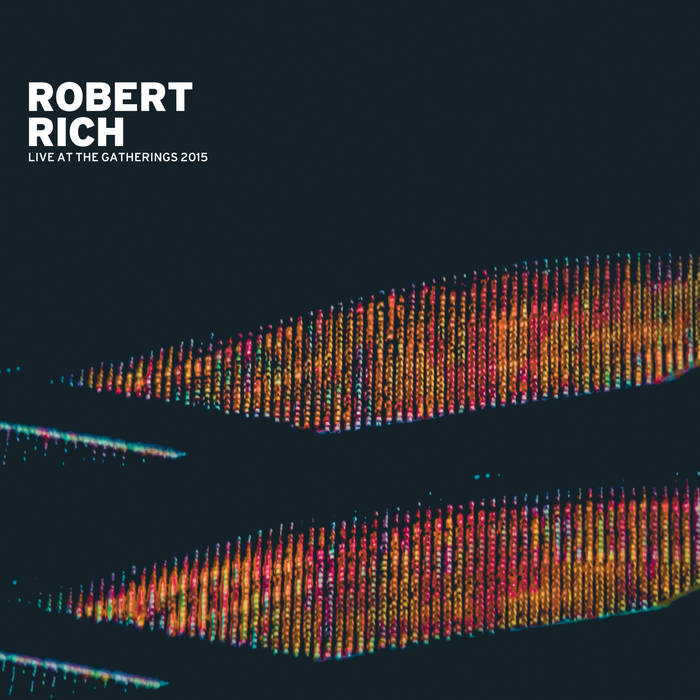 aythar.music It's a beautiful double album. I like it. Favorite track: Nesting On Cliffsides.

Robert Rich is about more than just exhibiting himself on the stage. His many concert appearances are understood as substantial, yet ephemeral experiences in sound. Among the most notable are Rich's numerous appearances in Philadelphia as part of The Gatherings Concert Series. This is a safe place for innovative musicians to explore creativity, and discover what lies inside - the listener and player alike. We now have a permanent treasure to add to the memory of one such concert. The double CD Live at The Gatherings 2015 presents Robert Rich's 11 April 2015 performance, an album that will touch your mind, and may even invade your dreams. While Rich focuses on the brainy, metaphysical aspects of his live work, he is always solidly attentive to the more practical issues. Through contour, pacing and tone, he makes buying admission to one of his live events a ticket to a foreign land. In coolly assured advances, forthright flute solos ascend through reverberant chambers, then brood over their own worth. Thrusting percussive rhythms rumble beneath swooning steel guitar solos. Snapping with a seductive skill, drums invigorate the mood, but we find the foreground is commanded by a writhing fuzz lead line - moaning through electrical circuits. Remote synth strings project both fragility and flashes of brilliance. Further down below we encounter tectonically imagined realms of biomorphic abstractions meant to beckon and boggle. Here Rich seems to reach into silence - bringing back something which may glow warmly, or just as easily, feel cold and damp. A mist to the brittle spirit, Robert Rich in concert is an event which celebrates the complexity of the human mind. The transit between quiet cerebral musings and propulsive visceral thrills seems to generate this album's own energy. Like Rich himself, and the music he realizes live, Live at The Gatherings 2015 is authentic. It both belongs to our era, and transcends it. We are the meaning-seeking animals, and Rich, at some great height, is constantly searching within himself for something deeper to express. Passion... is it the friction between the world and the soul? If so, then Robert Rich's concert space is about passion, as well as pleasure. It also acts as an outlet for intellect - and a bit of musical virtuosity. So, while each audience member is entitled to their own personal interpretations, the common connection here is the ability of this experience to connected us to that which is humane, gentle and life-giving - a function which we see slowly receding from the modern life.
- Chuck van Zyl/STAR'S END   25 May 2017

©1987-2015 by Robert Rich. All music realized live in concert on 11 April 2015 as part of The Gatherings Concert Series at St. Mary’s Hamilton Village in Philadelphia, PA.

This double CD features the complete concert, its sequence and encore (without any performance edits or overdubs), and has been split at an appropriate point so as to fit its content onto two discs.

Benji B talks about his new compilation ‘Deviation Classics’