Lift a Feather to the Flood 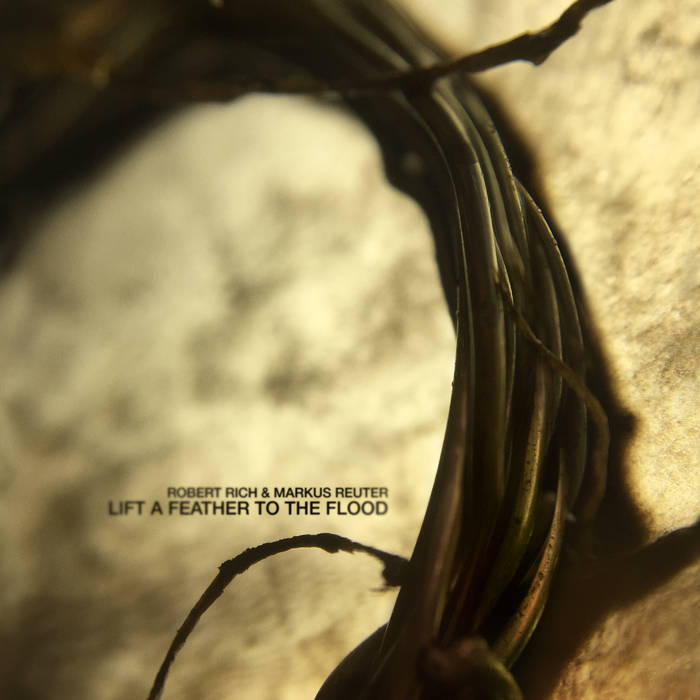 yeahsee Robert Rich has made a ton of great albums, be it solo, or collaborations. Add this to that list. Rich’s Piano wonderfully played to Reuter’s touches is an excellent combo. Whomever sent the cd, thanks kindly for the autographed Robert Rich card. A very nice surprise. It will remain unscathed. Favorite track: That We Were Made of Stars.

Awaelitra I visit this album a lot. Stunningly beautiful and simplistic, but still a lot to discover within it's shadowy corridors. Another job well done by these gentlemen.

StillMovingArt DIfferent to the equally intriguing Eleven Questions collaboration, Robert and Markus have travelled together through a living landscape in uneasy motion, one which may nourish you if you traverse it, but maybe at the cost of comfort...tense and quietly exhilarating. Favorite track: Seedlings Push Through Cracks.

Markus Reuter has earned acclaim for his work as a composer, guitarist, guitar designer, sound designer, producer and teacher. Long-time collaborator with King Crimson drummer Pat Mastelotto in TUNER, Markus tours the world in Stick Men with Mastelotto and bassist Tony Levin. His duets with Ian Boddy have led to many respected albums on Boddy's DiN label, while his group Centrozoon and his epic orchestral work Todmorden 513 show different sides of his maverick nature. Reuter also collaborated with Robert Rich on their previous release "Eleven Questions" (2007.)

Robert Rich has helped define ambient and electronic music with dozens of albums across four decades. He began building synthesizers in 1976, and studied computer music at Stanford's CCRMA while earning a degree in Psychology, researching lucid dreaming. His all-night sleep concerts became legendary. Along with performing and recording, Rich designs sounds for synthesizers and media, teaches and lectures worldwide, and has mastered hundreds of albums.


Robert Rich & Markus Reuter are well-known for their many musical journeys - from the back of beyond to the brink of the mainstream. On Lift a Feather to the Flood (66'00") they mainly explore tonality, and many of its subtle shades and moods. With Rich at the grand, and Reuter breathing out atmospheres and textures from his touch guitar and synth, this duo realizes eight subtle thought zones meant for pondering and questioning - more so than assurance and confirmation. On Lift a Feather to the Flood we do find the dignified, stately procession of reverberant piano notes walking thoughtfully through a cloudy haze of digital mist. But the most potent pieces are made with an ear for light, motion and surface - compositions that we must reason our way through. It is in these deepest moments that we may feel this album's personal tone. As they work in this unique frequency, using melody and harmony likes signs and symbols, Rich & Reuter lean into the Avant-Garde. Locating tone is their mission, and the production of these rarefied ambient zones touches a distinctive, inquiring energy, and maybe even a bit of our fear of the unknown. This work does seem to be searching, just for the stimulation of it - with Rich & Reuter sharing their deep wondering about music, humanity and life. This duo knows about this music's secret mind, and in their dreamy, drifting, lulling, pulling sonics, we approach something like the actual flow of consciousness.
- Chuck van Zyl/STAR'S END 18 May 2017